History of the Pelham Cemetery 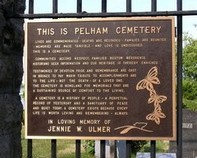 At the west end of Reville Road on City Island is a lovely cemetery named "Pelham Cemetery". It is the only waterfront cemetery in the five boroughs of New York City. Next to the gate of the cemetery is a bronze plaque that says, in part, the following:

"THIS IS PELHAM CEMETERY... Lives are commemorated -- deaths are recorded . . . This is a cemetery... A cemetery is a history of people -- a perpetual record of yesterday and a sanctuary of peace and quiet today. . ."  These words certainly ring true. Pelham Cemetery was established in the 1880s. There are, however, older gravestones within its grounds. The cemetery is filled with the gravestones of well-known Pelham families and early settlers. The grave sites of veterans of the Civil War and virtually every War since may be found in the cemetery.﻿"﻿

Where to Find Us:

See the article in the September 2012 issue of The City Island Current for a brief overview of the Pelham Cemetery.